Nipika Mountain Resort is no stranger to hosting awesome events and on February 24, 2018, they did it again with their inaugural Cross River Ripper Fat Bike Race. Around 50 riders from all over South East BC took part in, what turned out to be quiet a ripper of a course indeed.
Mild temperatures, blue skies and a blisteringly fast, machine groomed course took riders on a roller coaster of a ride thru some spectacular terrain and with 5km, 10km and 20km tracks, there was something for everyone. 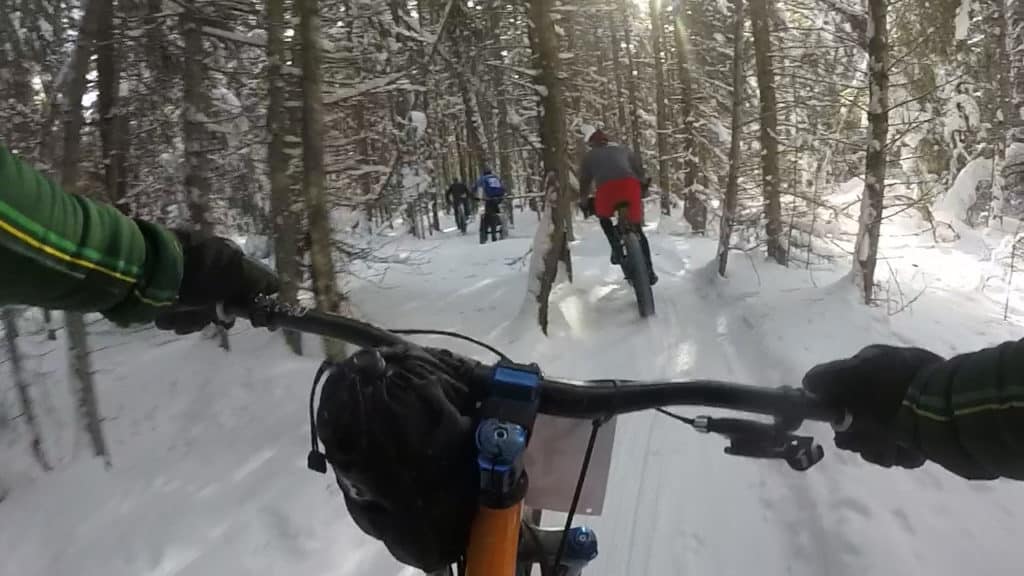 Hot in pursuit, deep in the flowy trails of Nipika.

Now, I’m no racer. I ride bikes as much as I’m able, but of course not quite as much as I used to on account of trying to raise a family. I knew, going in, that I was just going to ride with my peeps and have a good time.
I had no aspirations of making the podium and lining up with the likes of Jena Greaser, Dylan Bailey, Ryan Draper, Mark Dyck, and Jakub Sumbera affirmed that. I have ridden with these folks before and I know they’re animals! Lyle calls out over the PA, “1 minute racers… 1 minute…” Suddenly, all was very quiet as the racers listened intently for the start signal. I adjusted my headphones and started my tunes, then…. HONK!
Unprepared, I fumbled looking for my bars as I watched the upper caliber riders fly away from the start line reminiscent of the saying “Ride it like you stole it!” I kind of laughed to myself at how behind the 8 ball I was at the start but regardless of how fast off the line I was, I knew that I’d likely end up mid pack entering the singletrack. I’m no slouch on a bike after all. 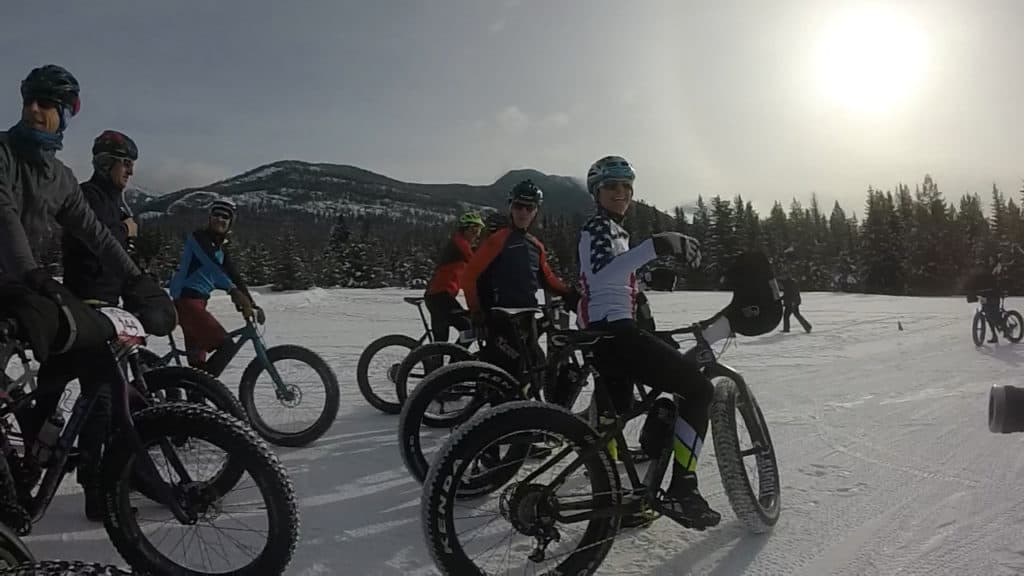 The sun was shining, and it was above -20. Perfect day for a race!

If Nipika didn’t have a good reputation for high quality groomed trail before, they certainly do now. The track was fast and firm, at least on the first 10km lap. The second lap was, as expected, a little different and tested one’s fat bike handling skills. Fat tires in numbers can really break down even the best-groomed trail. As I rolled through the halfway point, I was on my own.
All the Greyhounds were up front and I had found my comfy existence in the pack with one rider a couple minutes ahead, and one a couple minutes behind. Just far enough away to not hear my gurgled panting as I dropped into the singletrack once again. While Foo Fighters blared in my ears I settled into a nice pace.
Since I could hear my heart on my GoPro videos that I watched later, I was able to calculate I was humming along between 170 and 180bpm which is pretty much the max for my 47-year-old heart. I wouldn’t say I was in the red but I was close.
As I approached the feed station, I could see my buddy Kelly, the frontman / do it all guy at Nipika, yelling something happily at me. I learned later he was trying to dose me with Fireball which, in retrospect, I should have partaken in, however, stopping would have likely blown my ticker. With a bump of fists, I decided to keep the blood flowing and keep pedaling. 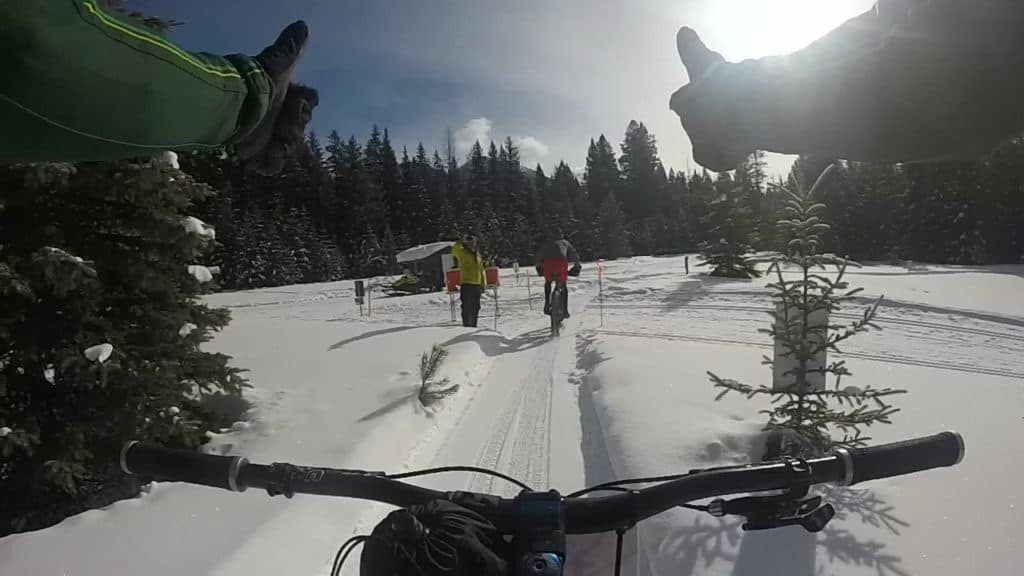 Mandatory double thumbs up for Kelly, keeper of the fireball.

Anyone who was at the event may have had an altercation with “The Tree”. I have had the odd run-in with mother nature but this one took the cake for me. One particular descent was fairly long and steep.
On the first lap, I was pretty much off the brakes hurtling through the trees but the 2nd lap was a little different. I came into this particular section fast and confident. Little did I know I was moments away from getting spanked… hard… As I crested the top, my eyes widened to see a nasty rut filled with corn snow which equates to zero braking traction. Kind of like riding on ball bearings. I held on the best I could but there was no avoiding the inevitable. I was going to become intimate with a tree. Not the soft gentle intimacy we mountain biking tree huggers seek when we’re in nature. No. This was going to be an unwanted S&M encounter with no safety word.
Realizing that I really didn’t want my bike anywhere near me, I kicked out and braced myself for impact. My body collided hard and bounced off sending me spinning onto my back. Somehow I was able to get a hold of my bars, so I quickly spun the bike around, saddled up and made it out of there. No injuries other than a bit of bark rash and an iPhone shaped bruise deep in my quad which I’m still trying to roll out to this day. Thanks, Siri… 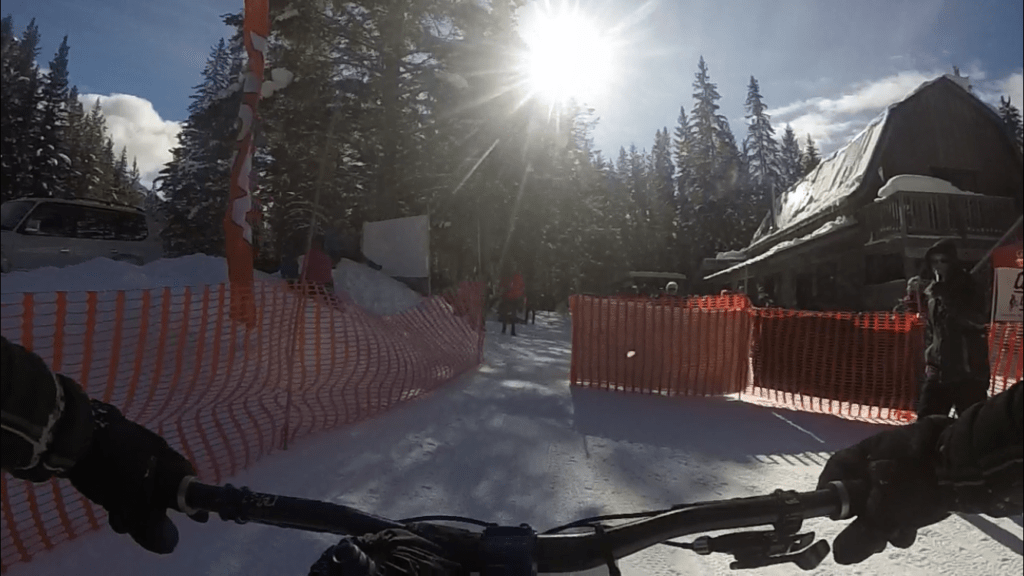 What a great day of racing! There’s something to be said for testing your mettle and really putting the hammer down during an event. I wouldn’t consider myself competitive per se. I think it’s more personal for me. How fast can I ride and for how long? Can I ride it clean? What would I change next time around? Live and learn. Ultimately, it’s about riding bikes and having fun. Set reasonable expectations for yourself. I knew I wasn’t going to make the podium, but it didn’t stop me from riding as fast as I could and I couldn’t be more happy with how it went down. My best result was 9th Adult Male followed by 10th Male and 11th overall and I’m stoked! I’m sure I speak for the community here – Huge thanks go out to Nipika and all the vollies that made the event possible. Next year is going to be even bigger! Let the Fireball flow!!!